The outside tank (article - english)

This article was wrote about March-2005 and translate to english from original in spanish by Monica.
You can see all images here. Since I grow aquatic plants, I have considered light as one of the most fundamental and limiting factors for plants’ development. Limited space or economic constraints always meant that I could never have as much light for my plants as I wanted.

If algae grew, or nitrates built up, or a plant did not become red, it was due to lack of light. When there was no more room on the lid of the tank to attach fluorescents tubes, and still light was insufficient, my persistent question became: how to increase the amount of light that my tank received?

During the summer I had dismantled my tank. Taking advantage of this fact, I decided to install a base for the tank in the area of my house’s courtyard with the longest hours of sunlight, and I took the tank outside. 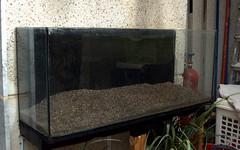 The dimensions of the tank are 100x30x40 cms. This means a total volume of around 120 litres (31 gal). To measure the amount of fertilizers, I nevertheless consider the tank to have 100 litres.

The substrate is a mixture of little gravels used in previous tanks, with some clay, humus, roots and other organic rests. Later on I added some litres of Flourite Seachem.

The water filtration system is an engine at Fluval 104 filled exclusively with Perlon. Every 30 or 40 days approximately I change completely the old material with new one. This way, the filter only works as a mechanical filter. Since the installation of the tank, I have entrusted both plants and substrate to do the chemical and biological water filtration.

To input CO2 I use a CO2 bottle connected to an electrovalvula AZOO plus a digital temporizer. The gas is dissolved by using a ceramic diffuser situated next to the source of water supply. This way, the filter dissolves the gas into the water completely. I keep the levels of CO2 as high as the tank fauna allows me to.

I use ordinary tap water to fill the tank. I adjust the levels of water lost by evaporation (around 3 litres every day) with reverse osmosis water. Water quality and hardness vary slightly during the year, but according to the latest tests, it has a general hardness of dGh 24, dKh 8 y ph 7,4. The latest chemical analysis done by the water supplying company (to which I had access to) showed a complete absence of nitrates and phosphates (data for 2001). I change around 20 litres of the tank’s water every 7 to 10 days.

When installing the tank, I put a pierced pipe at the bottom of the tank. My aim was to introduce the nutrients through the pipe, in order to avoid both the water column and the algae. I have used and I still use this system regularly, although I have not observed particular benefits or damages from its use.

The tank is exclusively kept with sunlight. It is situated in an area of the courtyard that receives, at the very least (in December), two hours of direct sunlight. Due to the orientation and situation of the courtyard and the surrounding buildings, the hours of “effective” sunlight is restricted from 9am to 5pm. In the attached diagram it is possible to observe the light intensity the tank received during the month of January.

Fertilising
With the help of a dispenser, I fertilise with a homemade solution of Potasium nitrate – P. Sulfate – P. fosfate so to get a concentration of 2-0,1-3 mg/litre. Every two or three weeks, just before changing the water of the tank, I usually test the concentration of nitrates and phosphates. Until now, the results of these tests have been practically the same: nitrates 0 mg/l and phosphates 0,25/l.

I aim at keeping low input of iron and microelements fertilisers. To do this, I watch out for the appereance of clorosis in the plants. Currently, to avoid clorosis, it is enough to add 1ml of Flourish Iron every 2 or 3 days.

The tank fauna is made up of a dozen of Tanichthys Albonubes, 6 Rasbora heteromorpha and 6 Otoncinclus, along with (10-12) Apple snails (Pomacea) and other spontaneous animals. From time to time I have observed the presence of some Odonatos’ larvae and some earthworms, which probably come from the old substrate where I introduced them.

The number of different plant species is quite large. In all, there are around 30 species that grow or have grown in this tank. Nowadays, the plants are the following:

I have previously grown all these species in indoors tanks with 1 w fluorescent light per litre, with success in almost all cases. 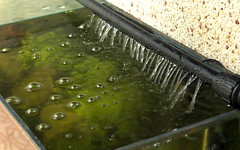 I set up this tank on 1st October 2004 with plants coming from a tank previously dismantled. Being already aquatic plants, their adaptation period was short and they started to grow well from the first day. The Hetheranthera and the Micranthemum umbrosum have grown healthily from the beginning, but particularly noteworthy has been the growth “explosion” experimented by the Lilaeopsis and the Eleocharis. Undoubtedly, these two species have shown the most spectacular change in their growth rate if we compare them with how they did in an artificially lighted tank. This has obliged to frequent trimmings so to avoid overgrowth.

Other species that have shown an excellent growth rate have been the Myriophillum, Glossostigma, Bacopa caroliniana, Ludwigia repens, Juncus repens, Potamogeton y Limnophila. All floating plants, including the Riccia, had a bad time when winter arrived, as temperature outside water dropped to 6ºC-7ºC overnight. Particularly, the Riccia grew better when being tied up and kept submerged than when it floated on the surface. The Pistia and the Eichornia would have died if I had not transferred them to an indoors tank. Probably only Salvinia minima and Lemna could have survived the temperature contrast between the tank water at 22ºC and the outside water temperature at 6ºC.

Problems
Whereas troubles with surface temperature were expected, there was another temperature-related problem that caught me by surprise: bad water circulation in densely thicketed areas. Plants’ density in some areas of the tank was so high that it was significantly difficult for water to circulate. This meant that there were areas of the tank with a water temperature considerably lower than the rest. I realised of this when replanting some Potamogeton stellata stems. I observed that the stems had not only rooted onto the substratum, but the roots had overgrown and looked like wanting to “escape” upwards.

It was possible to feel the different temperature simply by submerging one’s hand. This was especially the case at the bases of the stems of the Micranthemum umbrosum and the Potamogeton. I do not particularly like ground heating wires, but for situations like this they may be useful. Also, it is important to pay especial attention to improving water circulation in the densely thicketed areas of the tank. An auxiliary engine may be a solution for this problem.

In any case, the ending of the winter has meant that this problem has started to resolve by itself.

Algae
So far I have not had any critical problem with algae. From the beginning I have aimed at keeping stable levels of nutrients. I have avoided creating any peaks in macronutrients excess or deficit by fertilising daily and keeping a high density of plants. One month after setting the tank I had a small brown algae’s attack, which, funnily enough, was caused by lack of light. The brown algae started to disappear as soon as the plant population started to increase. Sifoneos when changing the tank’s water also helped.

On one occasion I had a short sprout of cyanobacter on the stems of the Micranthemum umbrosum, which only lasted for 6 or 7 days. This problem was resolved by improving water circulation in the area.

Currently, there are some filamentosus green algae in the densest area of the tank, where water circulation is worse. Periodically, they fall off in the form of little “hairy” balls.

Undoubtedly, one of the most surprising changes happened with the sub-aquatic species, and particularly with the Rotala rotundifolia. This plant came from a previous tank where it developed in the “normal” way: thin stems that bend near the surface, where they tend to grow horizontally, and long and slender leaves that become orange-coloured when the stems grow tall. When in the tank, the plant started to produce new round-shaped leaves, almost identical to those that it grows when cultivated outside water. Also, it developed straight and thick stems that not only did not bend near the water surface, but came out the water easily. Occasionally, a replanted stem has reproduced slightly longer and thinner leaves, but as soon as the plant has grown tall it has replaced them with thicker and rounder leaves.

I kept the Limnophila aquatica floating in a sink in a shady spot for a couple of weeks, before I set up the tank. Once the tank was ready, I introduced two stems of this plant, which barely measured 4-5 cm, in the new tank. Almost without delay they started to grow astonishingly. As soon as the Limnophila aquatica began to enjoy the sunlight, they started to change their recognisable “head of hair-shaped” leaves with other leaves identical to those that the plant develops when cultivated outside water. Once they reached the water surface, they carried on growing for about 10-15 cm over the surface and then they flowered. What it was initially a surprise it has turned out to be a bit of a hassle, as all stems without exception end up blossoming.

With another limnophila the situation has been quite different. This Limnophila aromática was planted at the end of December. Immediately it grew quite a lot, changed its leaves slightly and then it stopped from growing further. I have replanted its stalks, which have grown until coming out from the shady areas of the tank. Once they have reached the lighted areas, their growth is almost non-existent, limited to some millimetres each week.

The Nesaea craussicaulis was planted at the end of January. In mid-February it stood out 10-15 cm from the water surface. From then on it has kept stems sticking out from the water and it is in continuous flowering.

The Riccia fluitans’ growth slowed down considerably during the winter months. As I said above, it grew much better when tied up and underwater than when floating. Initially, I put it down to the difference of temperature between the tank water and the outside. However, once the winter has ended and there are more hours of light, its growth has shot up, despite the fact that the minimum temperatures have only slightly increased (from 6-7ºC to 9-10ºC). 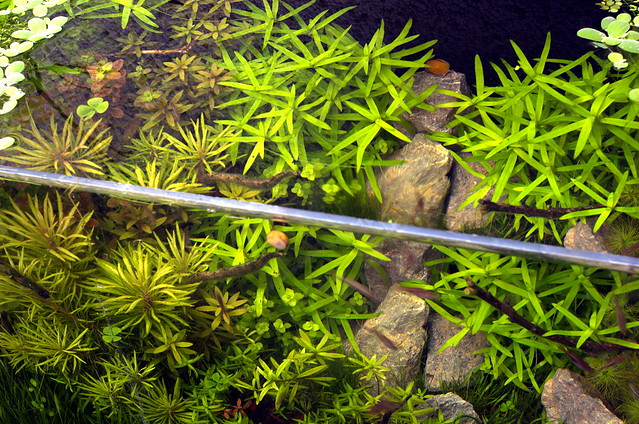 It is a well-know fact that the fotoperiodo is an important factor to trigger the flowering and the development of cultivated species. However, I ignored completely the extent to which it could alter the appearance of some plant species. Indeed, I await for the summer months and for more hours of light to confirm this observation, but so far it seems evident that, particularly in the case of some species such as the Rotala, the combination of light intensity with a different fotoperiodo changes substantially the plant’s morphology underwater.

I am currently transferring some plant species to indoors tanks with longer fotoperiodos, in order to observe how these plants developed. Everything seems to point at the fotoperiodo as the main trigger for these changes.